When do Chihuahua puppies’ ears stand up – is a common query among Chi-parents. If you’re wondering the same – read on to learn more!

Chihuahuas are a famous dog breed, owing to their small size and large, perked-up ears. Their alert nature, coupled with their fierce loyalty, makes them excellent watchdogs. Their prominent bat-like ears play no small role in giving them that vigilant persona endearing to canine lovers.

However, did you know that Chihuahuas are not born with this feature? It’s true! As pups, they have floppy ears. So when do Chihuahua puppies’ ears stand up? To understand that, we must understand the reason behind this physical trait, and that’s precisely what this article’s all about!

What’s The Deal With Chihuahua Ears?

A Chihuahua has erect ears because of the cartilage that forms over time, which gives them this particular look. Usually, a puppy’s ears begin to perk up after teething, although many can have upright ears as early as around five weeks. That’s because all the calcium reserves in its body are directed towards the crucial function of growing adult teeth.

The process usually lasts until seven or eight months of age but can be quicker or slower, depending on each dog. Once the puppy has all its teeth, the calcium in its body can be channeled to grow and strengthen the cartilage, making its ears stand up.

Some Chihuahua owners try to hasten the process by taping the puppy’s ears to stay up for several days before removing it. Supposedly, this encourages the ears to stay up. While apparently harmless, it’s hard to imagine it being a comfortable experience, and it certainly doesn’t have verified results.

The same goes for people who claim that massaging the ears helps them stick up. Yet others try to accelerate cartilage growth by giving the puppy calcium-rich foods such as yogurt, milk, or cheese. Experts strongly discouraged this as it can cause allergic reactions, or undiagnosed lactose intolerance can upset your pet’s little tummy.

Moreover, this method also seems to be more of a placebo. This is because there is no authentic research to prove the efficacy of this tip. Overall, there is more risk of harm than a chance of good resulting from it. So be patient, let nature take its course, and sit back to enjoy the show!

Do All Chihuahua Puppies Ears Stand Up?

Even though some dogs are late bloomers, be prepared that your pet Chihuahua may never get erect ears at all. This simple quirk does not indicate a problem or illness, so there is absolutely no reason for health concern.

A dog owner must also be aware that there is no hard-and-fast rule to Chihuahua ears; even after a Chihuahua’s ears pop up, they may occasionally switch to turning limp or alternating between one ear standing at a time. This process may continue until teething is complete and the calcium levels in the body have become steady. 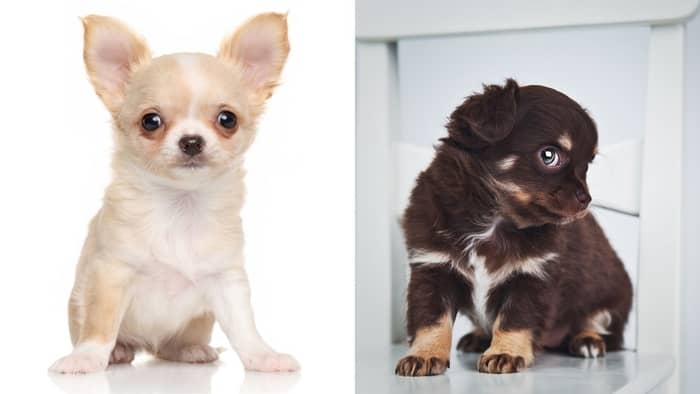 Learn more about: I Think My Puppy Is Deaf; How To Handle Hearing-Loss In Pets

Canines are often called man’s best friend, and the origin of their bond is lost in the mists of time. There is no more accurate testament to the significance of body language than this fact. A simple gesture or whine can alert an attentive dog owner to their pet’s mood or need. This holds true for Chihuahua ears as well. Dog experts cite a multitude of causes behind when and why Chihuahua ears stick up or droop.

As Chi’s ears are very prominent, they are prone to reacting with every mood shift. A Chihuahua puppy’s ears can stand up when they are alerted to something out of the ordinary.

Like human infants, Chihuahua puppies are curious, and their ears will perk up and tilt forwards at new sounds, smells, and sights. As they are watchdogs, they are pretty attentive to potential threats or danger, which is also something that makes Chihuahua puppies’ ears stand up.

How Chihuahua Puppies Use Their Ears To Communicate

If a Chihuahua is happy and excited, its ears will pop up and bend lightly backward to indicate it. You’ll generally observe such ear movement when your pup sees its food bowl filled to the brim with food. Chis can also get super-excited when they see their owners return home after being away for hours.

If your canine is upset or under stress, its ears will still lean backward, but the open-mouthed expression and happy barks will be absent. A perceptive owner will make a note of what has distressed the pup. It may be something like a new experience, such as a visit to the vet or stranger anxiety at the sight of an unwelcome guest.

It could also be a misunderstanding of a situation, such as thinking their owner is angry. Frightening or startling noises can also cause such a reaction, just as is true for human children.

If a Chihuahua puppy is not just upset but also full of fear, its ears will demonstrate it by lying flat against its heads. A prudent owner should try to remove the source of terror or ease the dog’s fear. When faced with a threat, you can never fully predict an animal’s reaction, so it is better to help rather than ignore it.

If the Chihuahua puppy’s ears are set wide apart, and it’s baring its teeth, it can indicate that the puppy feels challenged and will now seek to defend itself. Don’t take its small size lightly; your tiny tot can be a right live wire!

Dogs are intelligent creatures, and Chihuahuas are no exception. You can bridge the communicative barrier between humans and canines by paying close attention to your pet’s body language. Physical cues can encompass a plethora of signs conveyed through your pets’ eyes, the positioning of their ears, their tails, and posture. As Chihuahuas have a small stature, their relatively big ears are their most noticeable trait and vital in communicating their feelings.


Read more about: Why Does My Dog Blink With One Eye; The Secrets Behind Dog Winking